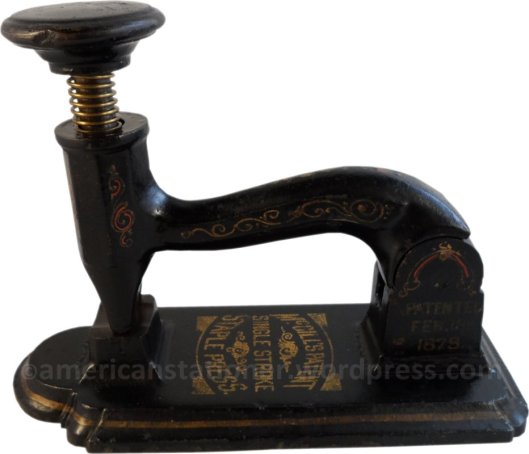 It’s fascinating to read articles on the internet about the invention of the stapler.  There aren’t that many of them.  Within a short space of time, if you do this, you’ll see that these articles are mostly copying from each other and simply reworded to make it seem like it’s new information being passed-on.  But it isn’t.  The worst part of it is that much of the information out there is flat-out wrong.  A French king using a stapler? Really?  That’s as believable as Steve Jobs refusing to work with anything but a typewriter.

Staplers have a long history, but their beginnings were in construction, not in paperwork management – royal or otherwise.  The patent that the Novelty Paper Fastener was based on was for use in constructing fences, not fastening papers, for example.  However, before long it became apparent that staples would be a good and inexpensive way to permanently fasten papers together.

But even this idea came about more as part of a greater “technology/business war” than years of research and development.  If we go back to just the 1860’s and 1870’s you’ll see paper pinning machines, the introduction of McGill’s brass paper fasteners, and office eyelet machines.  All of these made money, and they all had their strengths but they also had their weaknesses.

Enter the (in)famous George W. McGill.  McGill was already famous and well-off from his brass paper fasteners and his various paper fastener punches and presses.  And in 1878 he introduces his Single-Stroke Staple Press, later to be called the Staple Press No 1. 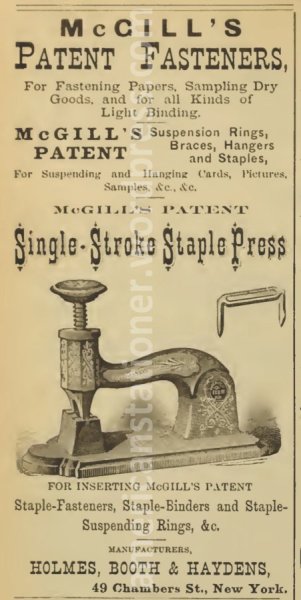 This was a bold move timing-wise and one that he made quickly.  While his Staple Press was available in 1878 he didn’t file his patent until January 1879.  It was quickly granted and by February 1879 he could now advertise it as patented.  It turned out that this compressed timeframe was absolutely necessary because in very short order he would have lots of competition.  For example, the following single-stroke staplers (amongst other models) were soon available:

The earliest, and most successful, of his competitors was the Novelty Paper Fastener.  While this item held patents from 1880 and later, Philadelphia Novelty Company also held similar stapler patents from 1877 and earlier.  This detail ends up being very important.  Despite these details there then began an over two year bare-knuckle battle of the then major stapler manufacturers.

It began in early 1881.  It was reported on March 3 that “George W. McGill announces his intention to take legal proceedings to stop the manufacture and sale of the Novelty paper fastener as being an infringement of his “patent single stroke staple press” for which Holmes, Booth & Hayden are licensees and agents. Mr. McGill’s attorney has sent out a notice forbidding the sale of the “Novelty.”

That very same day there was published an answer, “The Philadelphia Novelty Company, manufacturer of the Novelty paper fastener, denies that it has infringed upon the patent of George W. McGill, and says that it will assume all liability for damages that may be claimed from persons selling its goods. Hasbrouck & Ivatson, the agents for the Novelty, say that they will guarantee to protect their customers.”

Now, McGill was no amateur and at the same time he was taking legal actions here in the U.S. he was also taking action in the U.K.  On March 10 it was reported in the U.S. that McGill had brought action to restrain the sale of the Novelty Paper Fastener in English Chancery Court.  But in the U.K. there were plenty of shenanigans to go along with the legal proceedings.  For example it was reported in the London Times in February how one newspaper was taken to court over the erroneous and false report that the Chancery Court had essentially pre-decided the case!  When the Master of the Rolls decided on this particular issue he was quite clear how this article was both morally and legally wrong.

In November of 1881 the Philadelphia Novelty Company started running full-page ads that essentially stated that all other staplers, including McGill’s Staple Press, was in fact an infringement on their patents! 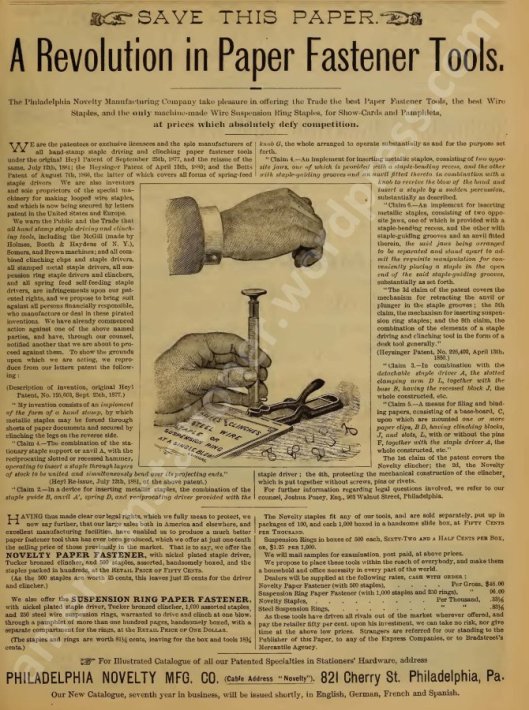 During the first year that this was going on there was some scare tactics by McGill that targeted customers and sellers of the Novelty.  But by January 1882 things started getting especially ugly when a story was “planted” that an export agency for the Philadelphia Novelty Company had surrendered and cancelled their agency on account of the ongoing legal issues.  Very quickly afterwards Philadelphia Novelty Company answered stating that the export agency in question did not surrender their agency due to legal issues, and that it had been shown in court that the patents in question did not infringe.  After this decision the public seems to have lost interest as this issue is no longer reported on.

While these kinds of bully tactics were fairly common at this time it didn’t end up effecting sales of either the Novelty or of the Single Stroke Staple Press.  McGill’s Staple Press was first advertised in 1878 but was still for sale as late as 1913.  While it was likely for sale for a short time after that it was at that point an obsolete technology.  There were plenty of choices and most of them could load more than one staple at a time. 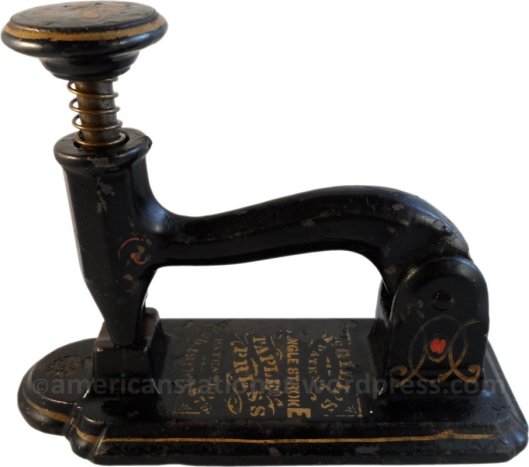 The McGill Single Stroke Staple Press No 1 weighs 2 lb 10 oz and measures 6.25″ L x 2.625″ W x 4.75″ H.  It is made from cast iron and steel with a japanned finish.  Japanning is not the same as paint or enamel but is a special type of lacquering finish (click here for more information).  The Presses were then hand decorated with various flourishes that changed over time. 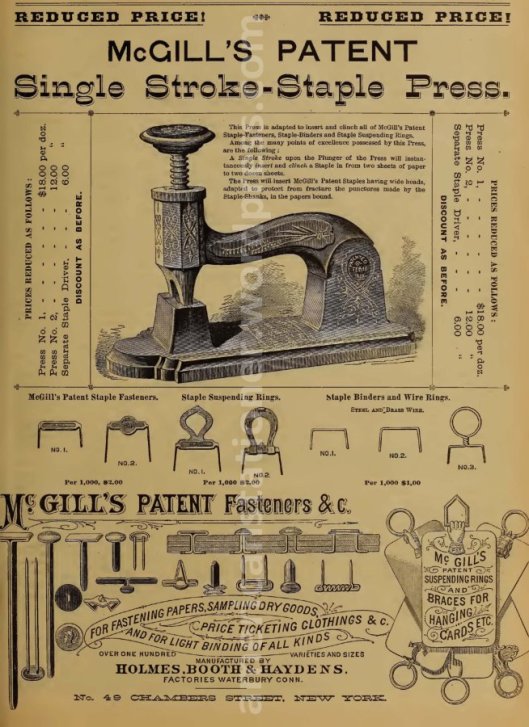 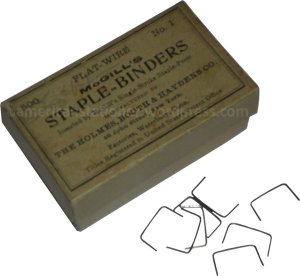 Almost simultaneously with the release of the Single-Stroke Staple Press here in the U.S., McGill released the Eagle Staple Press No 1 in England.  Aside from the painted decoration there was no difference between the models. 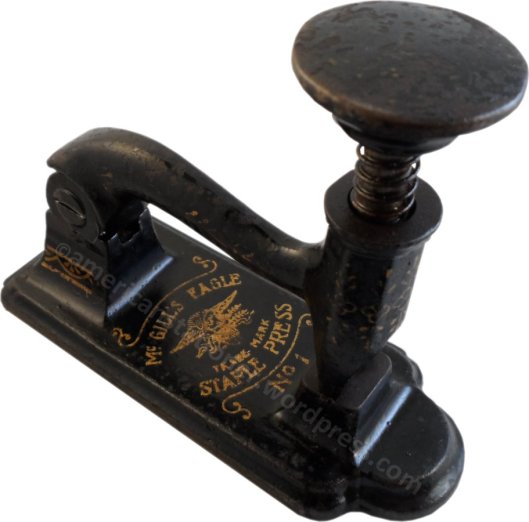 Visit me at http://www.facebook.com/americanstationer and let’s talk about vintage office supplies and equipment.  You can also support the American Stationer by getting my new, updated, 3d edition Hotchkiss Stapler ebook here at Amazon.  For all of you old-skool collectors, get the new 3d edition softcover paperback of my book STAPLERS, STAPLING MACHINES, & PAPER FASTENERS VOL 1 – E.H. HOTCHKISS COMPANY OFFICE AND INDUSTRIAL STAPLING MACHINES here at Amazon.  You’ll receive an excellent reference book and some good karma.  And I’ll earn a buck or two (literally) which goes right back into supporting the research costs needed for the American Stationer.