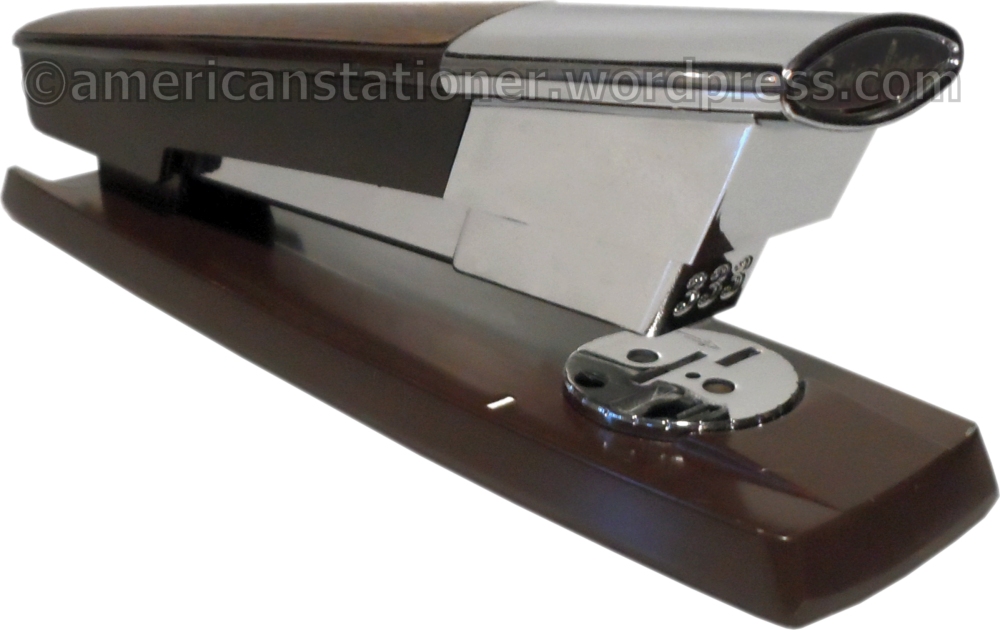 In the late 1950s/early 1960s the big stapler companies each released deluxe staplers.  It started with the Bostitch model B12 in 1958, then the Arrow model 210 in 1960, and finally the Swingline model 333 in 1963.  While Swingline was a bit late to the party they seemed to have used that time well as they produced one of the best looking staplers ever made.

The model 333 was released in two versions, the Executive model and the Deluxe model.  The difference between the two was in the handle top.  The Executive model 333 had a handle in smooth enamel while the Deluxe model came in either woodgrain or Moroccan.  Moroccan was a very thin layer of leather-type material attached to the top of the handle while woodgrain was a process wherein Swingline made the top look like walnut. 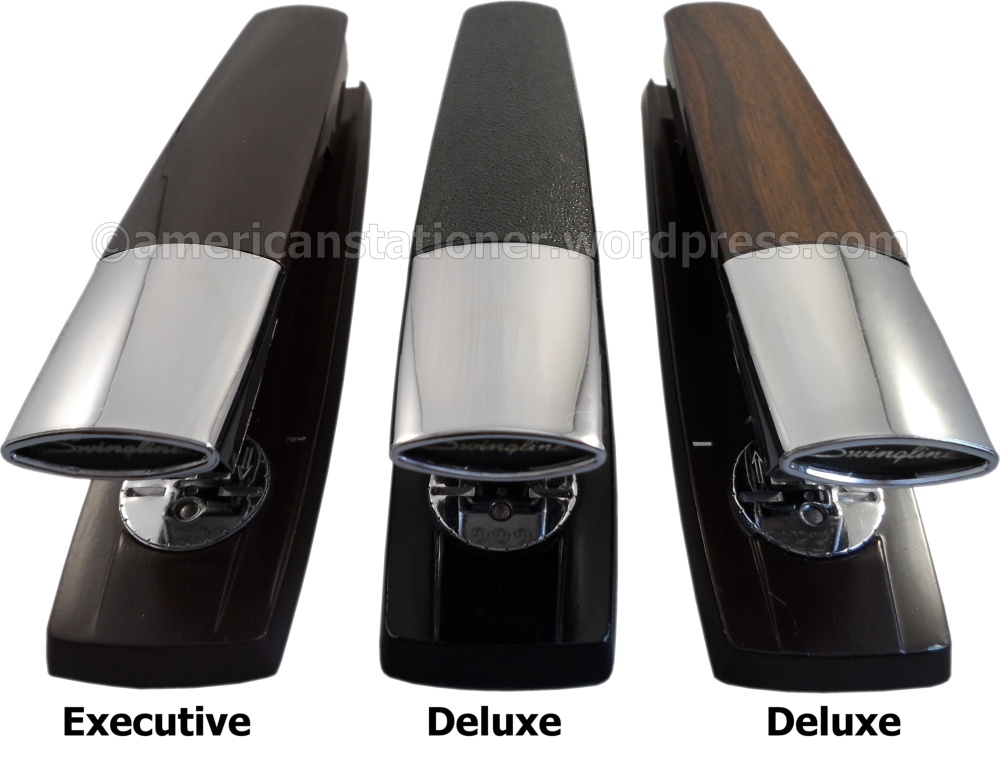 There was also another version of the Executive model numbered the model 333G.  This was the standard Executive model except that instead of having chrome plating was gold plated.

The 333 is made of steel and plastic.  It measures 2 inches wide by 2.5 inches high by 8 inches long.  It holds a full-strip of standard staples and is rated at 20 pages.  There is a sliding anvil that allows for both pin and permanent clinches.

First advertised in 1963, the 333 was last advertised in 1989.  As a deluxe stapler it was more expensive than Swingline’s other offerings of the time.  During the 26 years it was available it underwent no noticeable changes, but there are some to look for if you’re trying to determine a timeframe for your stapler.

For the earliest version, the bottom of the body is inscribed “Swingline Inc. Long Island City 1, NY”.  The “1” after Long Island City denotes a city postal zone.  This was the system in use before the current zip code system.  While zip codes were introduced in 1963 it likely took several years for Swingline to update the engraving.  On the bottom of the base is inscribed three patents.  This oldest version weighs in at 1 pound 4.8 ounces.

The second version has nearly the same inscription as the earlier one, but now has the zip code instead of a city postal zone.  The bottom of the base is inscribed with three patents plus “& FOREIGN PATS.”  This version weighs in at 1 pound 3.3 ounces.

This third version has the same inscription as the second except for the addition of a six symbol alphanumeric code stamped beside it.  The bottom of the base is inscribed with three patents plus “& FOREIGN PATS.”  This version weighs in at 1 pound 2.7 ounces. 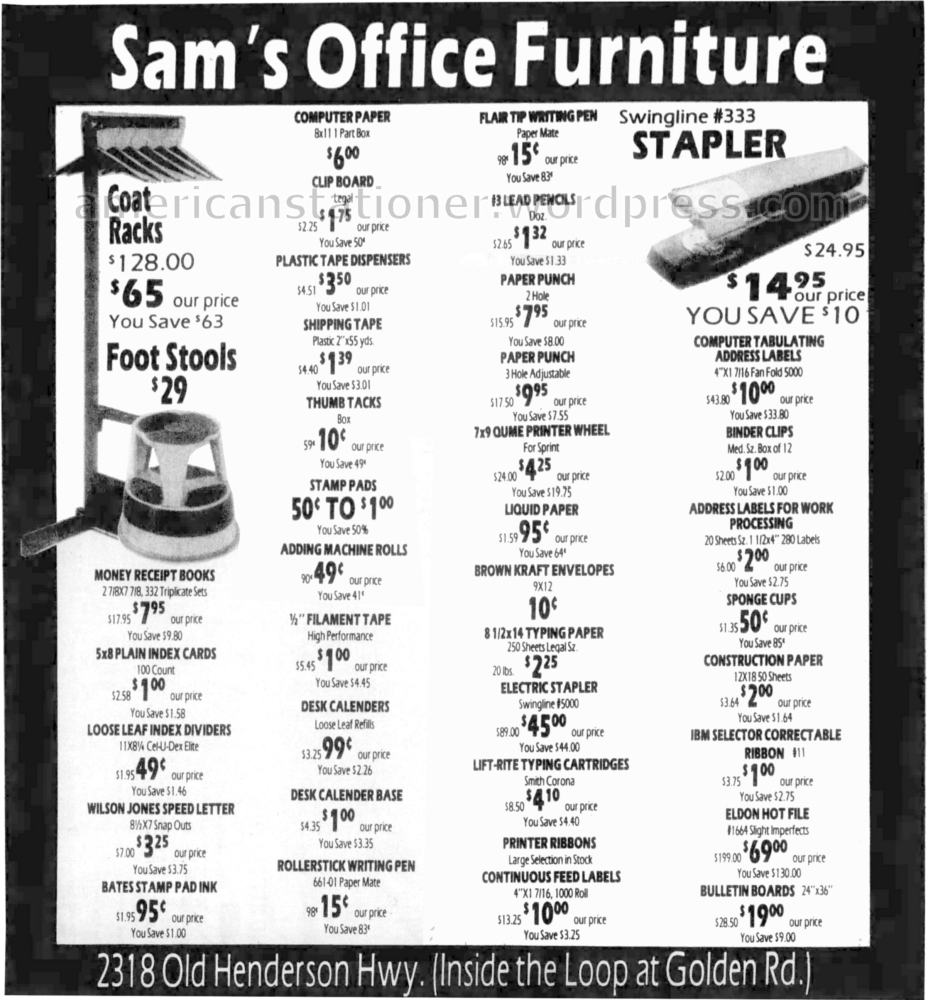 The Swingline model 333 is a great example of mid-century modern design.  It is of better build quality than the average Swingline model and will give many years of service.  For those putting together a vintage MCM styled office this is a must have accessory. 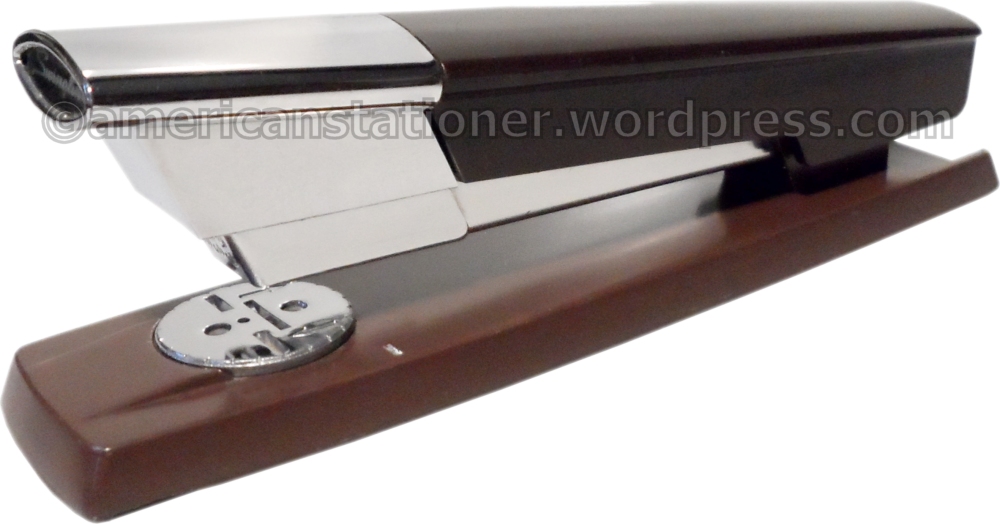 Help support the American Stationer.  The site really needs your help in order to stay alive.  Please become a supporting  patron by subscribing to our Patreon at www.patreon.com/americanstationer.

Visit me at https://www.facebook.com/groups/americanstationer and let’s get all nerdy about office stuff  🙂

If you enjoy the American Stationer consider purchasing one of my books at Amazon.

You’ll get one-of-a-kind references and information you won’t find anywhere else and you’ll help me keep American Stationer going.