Beginning in 1970 the world of stapleless paper “crimpers” started seeing more competition.  With the Paper Welder’s utility patent protection expiring in 1956 and their design patent expiring in 1970 the way was suddenly open for a whole slew of paper welder clones.  While all of the other clones that were produced were nearly identical copies of the Paper Welder, the Mini Press Paper Press at least introduced some changes to the design.

Measuring 5.375″ L x 2″ W x 4.688″ H it was slightly larger than a late-model Paper Welder and weighing-in at 1 lb and 6 ounces it was the same weight.  It has a plastic handle, a chromed zinc alloy body, steel press parts, and a felt-covered bottom.  The design differences centered around moving away from the original deco styling to what in the U.S. would be called Eurodesign.  This isn’t surprising when you consider that the Mini Press was manufactured in Italy.  However, while the Paper Welder has an almost timeless design the Mini Press now looks like a relic from the 1970’s.  It’s the office equipment equivalent of a ’73 Fiat 126 (note 1).

Now, in what was surely pure marketing to make this item seem like a new idea, you’ll see that the box had “World Patent” printed on it.  And on the Mini Press itself it’s inscribed Word [sic] Patent, Pat.6131.U.S.A., and Pat 123 52 / 1967 Japan.  Just for the record, US patent 6131 was granted in 1849 and was not for any kind of paper fastener.  Also, there is no such thing (that I’m aware of) as a “world patent”.  I will grant that this could just be a poor translation though of a phrase similar to “patented around the world”.  But I feel that this is the lesser of the two possibilities and it was more marketing.

The Mini Press was advertised between 1970 and 1975 and I doubt it was available for much longer than that.  It seems to have been mostly available through Hoffritz and Hoffritz Shops which were located within other retail establishments in the US.  Possibly it was available through other retail sellers (outside of Hoffritz) but if so only on a very limited basis.  I have never seen this sold through office suppliers and it’s unlikely that it ever was.

In all fairness, the Mini Press is a good fastener.  Not quite as good as the Paper Welder but much better than any of the other welding clones of the time.  With its plastic handle it was unlikely to hold-up under regular business use but for the average home-office user it would give you many years of satisfactory service. 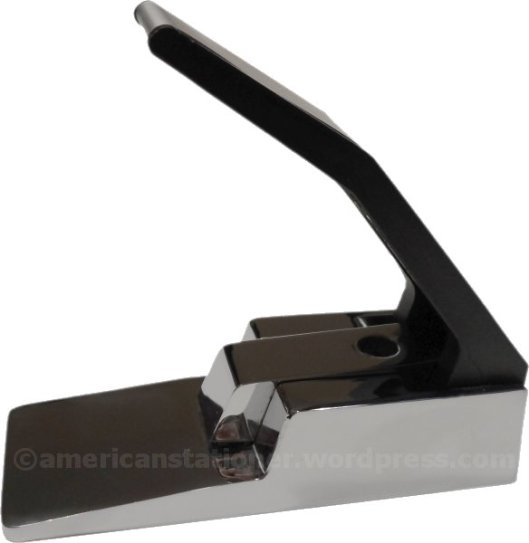 Visit me at http://www.facebook.com/americanstationer and let’s talk about office equipment