There is a reason why items such as scissors, staplers, hole punches and tape dispensers are widely used and available over a century (or much longer as in the case of scissors) after their invention.  It’s because they are just as practical, needed and useful as when they were introduced.  There are also reasons why some items were only produced for a very short time and you are unlikely to have ever heard of them.  While you can literally go to any kind of store and buy a stapler you’d be hard-pressed to find anything on sale today that dispenses paper clips one at a time.

This item falls under that second category above.  The Clip-Up is simply a cartridge-loaded paper clip dispenser that dispenses gem clips one at a time.  I consider myself a very organized person but on the office organization scale of obsessiveness this little beauty falls on the extreme end.

The bottom of the Clip-Up has “PATENT PENDING” stamped on it.  However, it is my opinion that this item was eventually patented, although this patent was never assigned to BVI.  If you look at patent 3170596 you’ll see that this matches almost perfectly with the Clip-Up.  This patent was held by Curt E. Nyberg who is listed as the inventor.  The application was made on July 12, 1960 and granted on February 23, 1965.  That means that this particular Clip-Up must have been manufactured between July 1960 and February 1965.  The overall style and colorization of this item, along with reasons listed below, lends support to that timeframe of manufacture.  There has been one recent reference found in a popular magazine from March of 1964 for the Clip-Up.  That means that it can be conclusively stated that the Clip-Up was available in 1964.

As an aside, and for the other collectors out there, you may recognize the name of Curt Nyberg.  He had at least 17 other patents amongst which were ones for the following items: 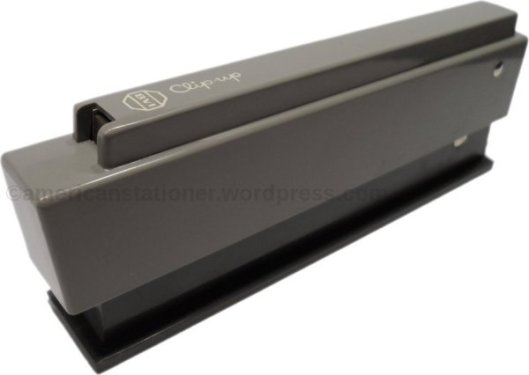 The 1950’s and 1960’s seem to have been a time when there was a lot of creative thought put into how to hold and dispense paper clips.  There were at least 4 patents for clip dispensers in the 50’s and 9 in the 60’s.  There was also a large number of patents for various holders and containers.  The following description is from a different patent but accurately reflects the reasons given on patents for all of the paper clip dispensers and holders from that era:

“Such clips are usually kept in a small open box or glass receptacle or in one of the compartments usually provided in desk drawers for various items of stationery, whereby the clips are always handy for use.  One of the objections to storing the clips in this manner is that the clips become mixed with other objects, such as pins, thumb tacks, rubber bands or other items placed with the clips to get them out of the way, and also come in contact with shreds of paper, cigarette ashes, pipe tobacco, eraser crumbs and similar undesirable matter.  In order to keep the clip receptacle orderly, frequent cleaning thereof is necessary, but the time for such housekeeping in an office never seems to be available.  Another annoying circumstance is that the clips do not always land in their intended desk drawer compartment and thus are scattered throughout the desk drawer.  It is not uncommon to find a year’s supply of clips in places other than the proper compartment therefor upon cleaning out a desk drawer which has been in use for some time.”  patent 2833028, paragraph 3, 1958

BVI specialized in the manufacture of various power tools, gardening and landscaping implements and electric home items such as can-openers and they held a large number of these types of patents.  This is the only office-related item that I’ve found manufactured by them.  It seems likely that this was not made for a very long time and was a poor-seller.  The combination of it being a very niche type of office item coupled with the need for businesses to buy purpose built paper clip cartridges which were likely much more expensive than buying them loose in boxes probably was a combination that ensured poor sales.

The timing of this does make sense to me though.  In 1958 there was a fire at the BVI plant in Grayslake that forced them to relocate for about a year or so.  They built a new plant in Grayslake which according to a 1959 article from the Antioch News was planned to be 85% larger than the previous plant.  With all that extra capacity it makes sense that BVI would attempt to expand into other lines of business.  Furthermore, for their fiscal year 1959 they saw a 75% increase in net sales so it sounds like they had the capital to invest in new areas.

Burgess Vibrocrafters, Inc. was in business from at least 1950, which is when the first patents were assigned to BVI.  It is possible that BVI was spun-off from a company called Burgess Battery Co. but I cannot confirm that.  BVI’s name changed to Acme Burgess in 1980 and was purchased by Armatron in 1985 at which time BVI moved all operations out of Grayslake, IL.

Special thanks to Charlotte at the Grayslake Historical Society for helping in my research and being patient with all my questions.  It’s people such as her that makes researching any type of history even possible.

Special thanks also to Roman Mudry out in Wisconsin.  Roman contacted me through this website and now I have a second Clip-Up, an original box, instructions, and a blank cartridge to go with my full one.  The empty cartridge oddly had some very handy information that confirmed much of what I had to date mostly just suspected about the Clip-Up.