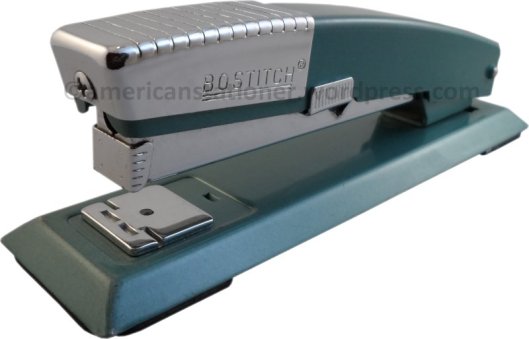 If I were to give my opinion on what the three best looking American made modern staplers were I’d say the Swingline model 333, Arrow model 210, and the Bostitch model B12.  All three of these models were introduced within a few years of each other but it was the Bostitch B12 that was the first of these stylish fasteners to be introduced to the public.

The utility patent for the model B12 was filed on September 11, 1958 and by November of that year it was being heavily advertised.  By the time September 1959 rolled around there was granted to Bostitch two patents for this stapler, a utility patent and a design patent (see below).

The Bostitch B12 is made from 100% steel with two rubber feet (or to be pedantic approximately 98% steel and 2% rubber) .  Even the chromed ornamental hand-rest is made from steel and not plastic.  This is a high-quality, well-made stapler that was designed to give the owner many years of service.  The B12 uses standard size staples and holds 210 in its magazine.  To load the magazine you simply slide the magazine latch (the rectangular chromed slide directly to the rear of the hand-rest and on the left side of the stapler) to the rear and lift.

This fastener measures 7 inches long by 2 inches wide by 2.25 inches in height.  It weighs one pound empty.  It  has a sliding anvil that allows both permanent clinches and pinning.  The base swivels 180 degrees so that it can also be used as a tacker.

The earliest advertisement that could be found is from November 1958 and the latest is from September 1972.  It’s unlikely that the B12 was available much before November 1958 but it is possible that it was available at least for a couple of years beyond 1972.  The Bostitch B12 was available in four colors:  black, beige, green, and grey.  These colors were available during the entire production run and therefore aren’t useful for dating your fastener.

The Bostitch B12 stapler is a perennial favorite for people looking to put together a vintage desk or office.  It’s a stylish fastener that uses easy to find standard staples which makes it practical as well.

Visit me at http://www.facebook.com/americanstationer and come talk about vintage office supplies and equipment with me.

If you enjoy the American Stationer consider purchasing one of my books at Amazon.

You’ll get one-of-a-kind references and information you won’t find anywhere else and you’ll help me keep American Stationer going.

3 thoughts on “Bostitch Model B12 Stapler”