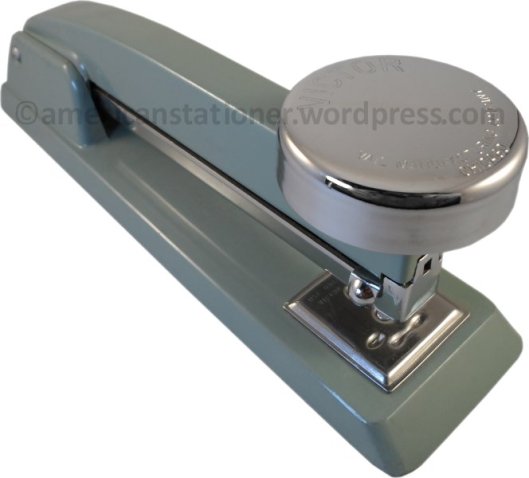 In the early 20th century, no later than by 1919, there was a company called Midland Steel Products Company that manufactured basic office supplies.  They made items such as wire waste baskets, paper trays, thumb tacks, paper clips, pins, etc.  In May 1921 they changed their company name to the Vail Manufacturing Company which was named after their company president, Richard B. Vail Sr.  Vail Sr. died in April 1925 and afterwards his son, Richard B. Vail Jr. took over the company as chairman.  Vail Jr. died in July of 1955 but not before leaving a legacy that would last long after he was gone.

Fast forward almost 30 years from 1921 to 1949 and Vail Manufacturing has filed its first of three patent applications for a stapler.  And they didn’t get just any old engineer to design this stapler for them.  They hired Curt Nyberg who only several years earlier had designed the very successful Presto Staple Remover for Metal Specialties Manufacturing amongst various other items for a  number of different companies.  The first of his three patents for this stapler was granted in May 1951 and by the beginning of 1953 the Victor Stapler is available in office supply catalogs.

The Victor Stapler was larger than most desk staplers measuring 8.25″ L x 2.25″ W x 3″ H and weighing 1 pound 12 ounces empty.  The body, plunger, and anvil are made of steel while the base is made from zinc. When introduced it came in several colors including: grey hammerloid, red hammerloid, brown hammerloid, ivory smooth, 18K gold-plated and “chromemaster” (yes, that was the actual color name).  Later on you’d also see them in grey, brown, and green enamel.

The Victor is a very high-quality stapler capable of holding approximately 210 standard-size staples.  But there really are two features that make the Victor stand-out from the crowd and these are the large circular plunger handle and the visible load indicator (part of the pusher assembly) button on each side of the staple guide.  The plunger handle may seem like a design affectation but in actuality it makes it much easier to use the stapler, especially when dealing with a large stack of paper.  The visible load indicator served two purposes.  The first is that it showed you at a glance how many staples remained in your stapler.  The closer the button was to the front of the stapler the fewer staples remained (see figure 1).  The second is that it was the way you opened the stapler so that you could refill it (see figure 1).  Pull the button all the way to the rear and the body would pop open from the staple guide so that you could insert staples or fix jams.  It is a very elegant design and one you would think would be copied more in modern staplers.

figure 1(the staple pusher button is shown above in gold for illustrative purposes only. It’s really chrome just like everything else)

Vail Manufacturing becomes important for essentially two reasons.  One is for its stand-out product the Victor/Monarch Stapler and the second is for the acquisition of the E.H. Hotchkiss Company.

Following is a bit of history and shows how interconnected companies become over time.

By 1987 Vail, Hotchkiss, Wilson-Jones, and ACCO are all one with Swingline.

Visit me at http://www.facebook.com/americanstationer and let’s talk about vintage office supplies and equipment.  You can also support the American Stationer by getting my new, updated, 2d edition Hotchkiss Stapler ebook here at Amazon.  For all of you old-skool collectors, get the new 2d edition softcover paperback of my book STAPLERS, STAPLING MACHINES, & PAPER FASTENERS VOL 1 – E.H. HOTCHKISS COMPANY OFFICE AND INDUSTRIAL STAPLING MACHINES here at Amazon.  You’ll receive an excellent reference book and some good karma.  And I’ll earn a buck or two (literally) which goes right back into supporting the research costs needed for the American Stationer.