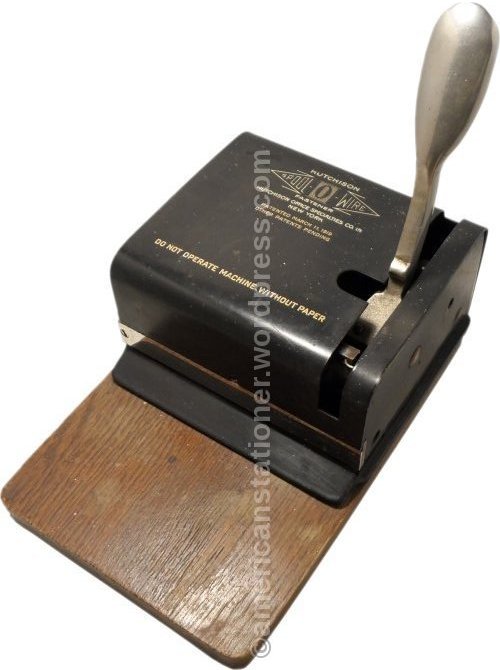 Miller Reese Hutchison was a successful man of business, a well-regarded engineer, and a prolific inventor.  In 1906/1907 he was dissatisfied with the various types of paper fasteners then available.  What’s such a man to do?  Well, if you’re a genius engineer and inventor you design and build your own fastening machine.

The prototype Spool-O-Wire was first conceived and built by Hutchison around 1906.  He applied for a patent in 1908 but it was not granted at that time.  Over the years he continued to tinker, modify, and improve the design until in March 1917 he re-applied for a patent and was granted patent 1235140 on July 31, 1917.

The Spool-O-Wire weighs 10 pounds with a full spool and measures 6.625″ W x 10″ L x 4.25″ H (lever when fully extended adds 5″ of height).  This was designed to bind from 2 to 40 sheets of paper at a time.  The wire used was a spool of special grade stitching wire measuring 1250 feet and would make upwards of 15,000 staples.  The operating parts of the Spool-O-Wire were made of tool steel.  The handle was nickel-plated.  According to a 1916 article “each machine is caused to make and clinch at least one thousand staples, as a test, before shipment.”

The Spool-O-Wire was a product of Hutchison Office Specialties.  This company was incorporated August  21, 1916.  The organizers and officers of the new corporation were:  M. Mayne, president; Miller Reese Hutchison, first vice-president; Robert A. Brown, second vice-president; and John Hobbs, secretary and treasurer.

Hutchison Office Specialties was located at the following addresses:

While Hutchison Office Specialties owned and distributed this fastener it was manufactured for them by Remington (of Remington Typewriter fame) during its entire run.

Hutchison was the Engineering Advisor to Thomas Edison.  He was a member of the Naval Consulting Board of the United States; President, Treasurer and Director of Miller Reese Hutchison Incorporated of New Jersey; and Vice President and Director of Hutchison Office Specialties Company of New York.

An interesting side note, it appears that Hutchison had broad-ranging interests which included his attendance at one very special seance.  While not particularly pertinent in discussions regarding the Spool-O-Wire I found this very interesting nevertheless; 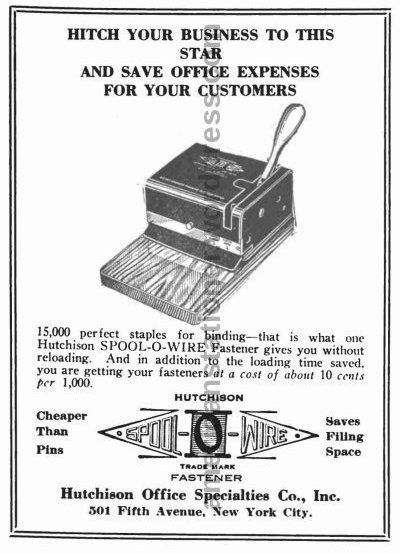