I love old mechanical things, history, antique office equipment and my home town. So what do these things have in common? Why, the Gem Pencil Sharpener of course!

And what’s not to love?  Hand cranked, gear driven with a rotating disk that holds sandpaper.  Even the pencil rotates while being sharpened.  This may be the coolest pencil sharpener ever.

Manufactured in Leominster, Massachusetts, the Gem Pencil Sharpener was made of solid cast iron with the only non-iron piece being the wooden handle cover on the crank. It measures 7.5″W x 7.75″ H x 7.5″ L and weighs over 5 pounds. Embossed on the base is the following:

And just like the apocryphal quotation from Henry Ford you could purchase the Gem in any color you wanted – so long as it was black. The Gem was packed in a box that included several sandpaper disks as well as a small can of oil.

I’ve seen the Gem in two different versions. One of them is as you see in the picture with a flat, square base that you would screw into a surface. However, there was also a version with a vise base that could be secured to a table or bench edge without the need for screws.

The Gem consists of a disk which holds a movable surface of sandpaper. A rotary movement is communicated to this disk and to the “chuck” for holding the pencil (much like on a drill) from a cog-wheel at the back of the machine, the wheel itself being moved by the crank. The chuck is swung on a pivot so that a point with either a long or short bevel can be given to the pencil. The machine operated by taking the lead or slate pencil to be sharpened and pushing it through the chuck until the end is over the sandpaper. The chuck is put in position so as to force the pencil against the sandpaper, the wheel is revolved and after a few turns the pencil is pointed.

What isn’t immediately evident is that while it worked well at sharpening, and it was tough as nails, it did have one major shortcoming. And that, simply put, was that it made an absolute huge mess. If you’ve done any wood sanding in your life you know how a large amount of [saw]dust is made in just a short time. The Gem didn’t have any kind of bucket, drawer, dust collector, or anything to catch all the dust created by sanding the pencils sharp. It wouldn’t take more than a few pencils to create the illusion that you worked in a wood mill and not an office or school.

And speaking of schools, while the Gem was marketed towards businesses its main success was its sales to schools where “many thousands” were sold. It was also exported to Europe, India, and China.

Another thing you’ll find about the Gem was that many of them ended up being modified to do other jobs. I’ve seen several of these that have been rebuilt to perform other chores, my favorite being the modification I once saw when someone a long-time ago re-worked the Gem to be a miniature sharpening wheel for knives.

The Gem Pencil Sharpener was patented on May 25, 1886 by Charles Gould and Frank Cook of Leominster, Massachusetts. The patent number is 342350. The sharpener was first advertised in 1887 and the last reference found is from 1914 from a local advertisement. This would have been the time period all of these sharpeners were manufactured.

The Gem was originally introduced and manufactured by Gould & Cook of Leominster, Massachusetts. When Charles Gould died in 1894 the name of the company was changed to F.H. Cook & Co. F.H. Cook & Co continued making the Gem until 1914. Oddly though, I’ve never seen an example of the Gem cast with the name of F.H. Cook & Co on the base, only Gould & Cook. The history of this company is as follows: 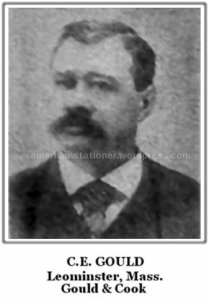 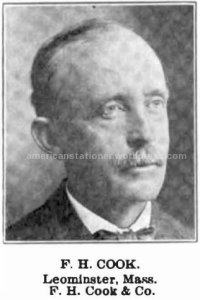 C.E. Gould was born in Chelmsford in 1842 but lived in Leominster for many years. He passed away in 1894. F. H. Cooke was a Leominster native, born in 1852 and educated in the local public schools.

To the various librarians at the Leominster Public Library. Not only were they helpful, but they were happy to do be so and were genuinely interested in what I was doing. Furthermore, while I spent a very long time in their special records room going through old records and books, they did some research without my asking and found the picture of C.E. Gould I have. I’ve always thought this library was one of the best in the U.S. and my opinion has only been strengthened. You ladies rock!