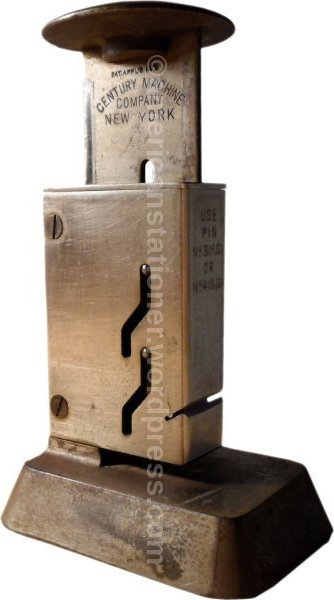 Industrial, rugged, a bit crude, and built for practicality are only a few of the descriptions you could use for today’s antique item – the Century Stapling Machine

The Century Stapling Machine takes a pin (brass or copper but preferably not steel), lops off the ends, folds the middle portion of the pin into a staple shape and then inserts and fastens that newly made staple into your papers. All this is done with a single sharp blow to the plunger. While common pins are no longer used in offices, when this was introduced pins were more often used than clips to secure papers together. Brass and copper pins can still be purchased from your local craft store and will work just fine with this machine.

office pins of the type that would have been easily available in the late 1800’s and which could have been used in the Century Stapling Machine.

I’ve found ads for the Century Stapling Machine from Washington state all the way to the United Kingdom and most points in between. While the Machine doesn’t seem to have been available for a very long time it was heavily advertised and widely available during the time of its manufacture.

The Century Stapling Machine was introduced to the trade by Albertus A. Weeks, who was a pioneer in the stationery trade and involved with many of the early fastening machines, although not always in a positive way. The Philadelpha Novelty Company had sued him for patent infringements of their Novelty Paper Fastener for example.

I can find no proof that there ever actually was a lawsuit. However, the short life of the Century Stapling Machine may be partly due to this notice of intent to file one.

The Century Machine Company specialized in working with individuals in manufacturing their patent ideas. These kinds of companies are still around and if you watch enough late-night television you’ll see their ads (always with the concluding statement “most inventions are not successful and Bill’s experience is not typical of what an inventor can expect”). I’m unsure why Lee S. Burridge decided to go this route although it may have been a way to distance himself and the Sun Typewriter Company from possible lawsuits.

ad from the American Machinist, September 1897

Mr. Burridge was born in Paris, France on September 22, 1861 while his parents were traveling abroad. Educated in England, he came to the U.S. to take a position with C.A. Aufmordt & Co in New York. There he became interested in the manufacture of mechanical toys.

In the early 1880’s he took up the development of typewriting machines, being one of the very first inventors to foresee the development and ultimate adoption of the visible typewriter. In 1887, at only 26 years old, he started the Sun Typewriter Company. He was president of this company until his death.

His knowledge of typewriter construction and patents was so comprehensive as to create a strong demand for his services as an expert in patent litigation, in which field of work he became noted. He was a prominent figure in many historical patent suits. Again, his experience in patent litigation may be the reason his patent for the Century Stapling Machine was assigned to and manufactured by the Century Machine Company.

In 1908 he became interested in aviation and together with some like-minded enthusiasts purchased the first aeroplane [sic] ever sold. He arranged the first public exhibition of flying that was given by Curtiss at Bronx Park. This aeroplane was sent on an exhibition tour throughout the United States and Canada, solely to foster and create public interest in aviation, and was in a large measure the start of practical aviation in this country.