With an amazing design that’s earned it a place in the collection at the Museum of Modern Art, consisting of a minimal number of parts, high-quality, heavy-duty, and easy to use, the Paper Welder is an office item that makes you want one as soon as you see it.  It’s often been copied but none of the pretenders are of the same quality as the original.

The paper welder worked by compressing two or more sheets of paper between metal teeth/gears forming interlocking slots which held the papers together without staples, pins, clips or any cutting of the papers.  The weld could easily be removed simply by rubbing it firmly with a flat object.

The paper welder parts were molded of a zinc alloy trade-named Zamak. The molded parts (for models C through F) were then chrome plated and polished to a “jeweler’s finish”.  The parts were then machined, enhanced and assembled into the finished product. (note 3)

I know of six variants of the paper welder, which for our purposes we’ll label as models A through F (see note 1).  Models A and B are the original and older design while models C through F are identical except for their various markings.  It is difficult to discern the difference between models D and E in the picture below.  The only difference is where on model D it states “Bathrick-Collins Inc.” it is replaced on the model E with a raised bar and words “MADE IN U.S.A.”.

above, models A and B

The initial utility patent for this device, 2188222, was applied for on 01/10/36 and granted 01/23/40.  This patent was granted to Ralph Hibbs of Philadelphia who was assignor of fifty percent to Stephen E. Lewis of Middleport, NY.

The idea for the paper welder first took shape in the 1930’s when Norman Bathrick was associated with Keith Lewis and his brothers in a machine shop near Jeddo, NY (a couple of miles from Middleport) (note 2). Leo Collins and C.J. Mack told Thomas Mack (the son of C.J. Mack) that  the original concept for the product came about when the original inventor was in his lawyer’s office and the lawyer affixed a notarial clamp-type seal to three or four duplicate originals of a document and then pried them apart (note 3).  Over the years the idea was further developed with the design finalized by 1955.

In 1952 when Bathrick-Collins Inc. was formed, Leo Collins was the President and Norman Bathrick an official of the company.  They were local businessmen and distributed the paper welder to a number of stores, including Macy’s in New York City.  The paper welder retailed for $13.95 with department stores reporting that it was a popular item at gift-giving seasons. (note 2)

Bathrick and Collins emphasized the fact that their device “needs no special supplies and almost no maintenance”.  It is designed to do a special job and not to take the place of all the services performed by a stapler.  (note 2)

In 1957, C. J. Mack, of Medina, New York acquired a 50% interest in the Paper Welder from Leo Collins.  Bathrick-Collins Inc. was dissolved and its assets turned over to Paper Welder Inc., a New York corporation formed in 1957 by both Leo Collins and C. J. Mack.  After Leo Collins’ death in 1960, C. J. Mack acquired Collins’ 50% interest in Paper Welder Inc. and thereafter ran the business as a sideline to his regular manufacturing business (Norco Machine & Sheet Metal Corp. of Middleport, NY) until his death in 1983. For most of those years, Joseph Schlinger, a master tool and die maker who had worked for Bathrick-Collins Inc.,  oversaw the day to day production of the product. (note 3)

The late 1960s were the boom years with total units sold averaging about 25,000 annually.  Competition from knock-off look-alikes took its toll, but a really major problem was the high cost of the chrome plating due to increasingly difficult environmental restrictions and laws. (note 3)

C.J. Mack passed away in 1983.  Thomas Mack was Executor and attorney for C.J. Mack’s estate.  During, and for a short while after, 1983 he attempted to keep Paper Welder Inc. running.  Escalating production costs and reduced demand made that impracticable and in 1984 he dissolved the company and discontinued manufacture of the Paper Welder. (note 3)

Foreign knockoffs from Hong Kong, West Germany, Italy and Japan started appearing around 1970 from companies such as Eagle, Hoffritz, Clipless, Invento, Paperina and Mini Press.  At the time the original patent had expired and only a design patent was in effect which was easily subverted.  Paper Welder Inc. utilized a patent lawyer to fight use of the Paper Welder trademark for often the knock-offs were advertised as “Paper Welders”.  In the early 1970’s there was a licensing agreement with an Italian company to produce a paper welder.  That company (likely Paperina) paid for Joseph Schlinger to go to Italy to help them set up.  The licensing royalties were not honored and not much transpired out of the Italian product.  That was the only licensing attempt. (note 3) 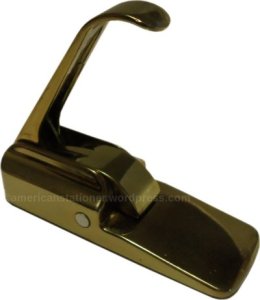 In the late 1970’s Paper Welder Inc. introduced a gold-toned welder in an effort to increase sales.  Not many were produced, maybe a 100 or so, as there was little demand for them.  (note 3)  Out of these approximately 100 gold-toned paper welders I have the one that previously was in the collection of Thomas Mack.  I have been contacted by two other people claiming to own one, but on further inquiries their claims turned out to be spurious. 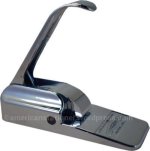 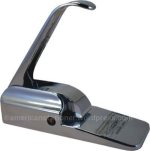 To Catherine at the Medina Historical Society for her help in finding and sending information about the Paper Welder.  Working at a small, regional, non-profit history museum is a difficult and often a fairly thankless task but she still took the time to send me hard-to-find otherwise information.   The best thanks I can give is to hope that my small effort to keep a bit of that history alive is successful.  Also special thanks to Thomas Mack who took the time to speak with me, look over my posting, and send me corrections, clarifications and some new information.

Further thanks to the curator at the Early Office Museum for giving permission to use his picture of what is now designated as the model C paper welder.

11 thoughts on “The Paper Welder”