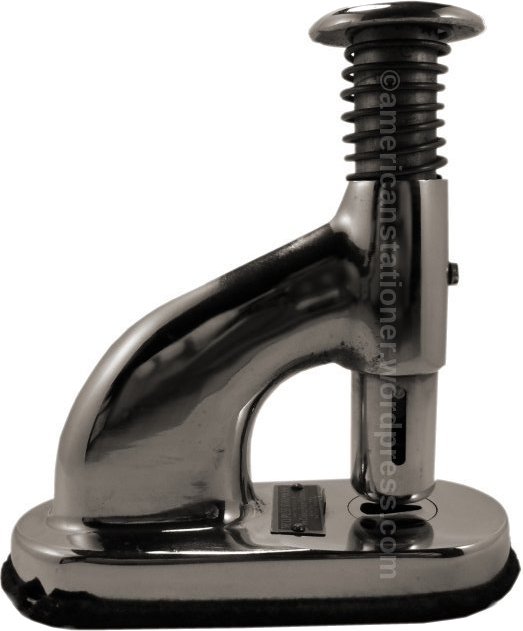 The Clipless Stand Machine is not a stapler, but a paper fastener.  The difference being that a fastener does not use staples, brads, pins, etc. but simply fastens the paper by only using the paper itself.  In this case it works by making two cuts in the papers to be fastened.  One is an elongated U-shaped tab and at the base of the tab a small straight slit.  The tab is then folded into the slit to fasten everything together.  This folks, is as green as it gets.  Of course, back then “green” would have just been called good design.  Fasteners of this type are often called stapleless staplers and variations on this are still made today.

The Clipless Stand Machine was invented and patented by J.C. Hawkins of Newton, IA.   My research hasn’t turned up much information, and quite honestly some of it is spurious.  However, Mr. Hawkins received patent 1173425 for this on February 29, 1916.  He applied for the patent on November 3, 1911.  It’s odd that it took so long for the patent to be granted.  J.C. Hawkins was also an assignee on patent 1009644 which is the patent for the Bump Fastening Method.  This helps explain how two different companies (Clipless Paper Fastener Co and Bump Paper Fastener Co) used the same patented method for fastening papers.

Hawkins patented a hand-held model of this fastener also.  This patent was applied for on October 5, 1911 but not granted until July 10, 1917.  Again, this is a surprisingly long time.  During this period his name appears on patent 1130590 which was granted to D.W. Gage of MA but assigned to J.C. Hawkins.  This patent, as far as I can tell, is identical in almost every way to Hawkins patent 1232541 for his hand-held fastener.  It doesn’t even look like they bothered to use different drawings on the applications.

The model I have, and honestly every model I’ve seen, has “patent pending” on the label.  The Early Office Museum shows this as being advertised from 1911-1923 but I can only verify up to 1921 (ads from this time are difficult to find so this isn’t surprising).  I do find reference to the stand version in an October 1911 periodical in an article that talks about improvements to the hand-held model.  However, it’s difficult to say if the stand version was available in October 1911.  If not, it’s apparent that it was very soon afterwards.  If the patent was applied for in 1911 and granted in 1916 then at the very least it’s reasonable to assume that this was manufactured during this time period. 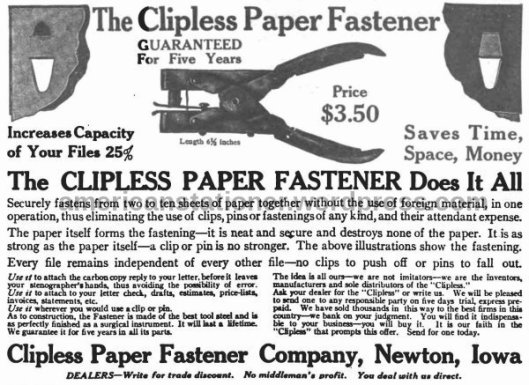 This fastener is well-built.  Mr. Hawkins certainly did not skimp on quality.  This weighs in at 2 pounds of nickel-plated steel.  It is 5.25”L x 2.25”W x 5.5”H which is actually a good size for desk top use.  The one in my collection has a few scratches but otherwise probably works as good today as it did a hundred years ago.  See if your fancy new tablet will do that.

Stapleless staplers and paper fasteners are amongst my favorite items in my collection and I actively seek them.  Their ability to securely fasten papers without needing any additional supplies make them great to use even today.