For me, this is the item that started it all – the Calcumeter.  The Calcumeter is a cogged-wheel dial adder that was operated by using a stylus (or a sharpish pencil would do).  There were a number of different models running from 5 dials (as above) all the way up to 12 and included models for adding inches and feet, “English money”[sic] (see below), fractions, an architect’s model, as well as others.  Starting in December 1905 ads begin showing the Calcumeter with the subtitle of “Standard Desk Adding Machine” and sometimes as the “Standard Desk Calcumeter”.  Beginning in December 1907 advertisements stated that it “now resets automatically” and ads from that time forward mention the new reset mechanism.

The Calcumeter is made of steel, copper and brass and the one pictured above is approximately 6.25″ L x 2″ W in size.  On the top edge are two folding legs that allow this to be placed at a maximum 45 degree angle when set on a desk top.

The earliest advertisement I’ve found is from January 1904 and the latest advertisement is from June 1914.  I have found a small article in the January 1902 issue of Scientific American that speaks about the Calcumeter.  Therefore we can date the availability of the Calcumeter from 1902 to at least 1914.  However, I consider it extremely likely that this would have been available for at least several years after 1914.

The Calcumeter was initially manufactured by the Morse & Walsh Co.  Beginning in 1906 the company name is listed as Herbert North Morse Co.  The location of both companies was always in Trenton, New Jersey. 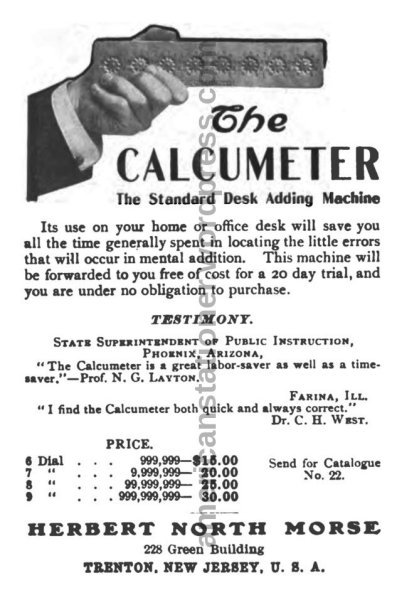 The model pictured is one of the earliest models.  Its 5 dials have a mechanical carry, which simply means that one full rotation of a dial automatically moves the dial to the left by one.  There is no reset mechanism on this model so you reset it by starting at the far right and successively moving each dial to zero, a tedious task at best. As noted above, starting in late 1907 a reset mechanism was finally added to all new models. 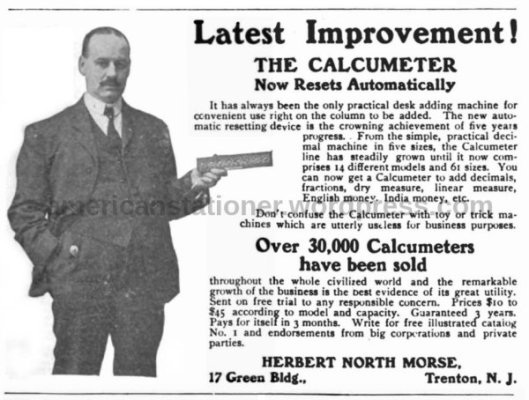 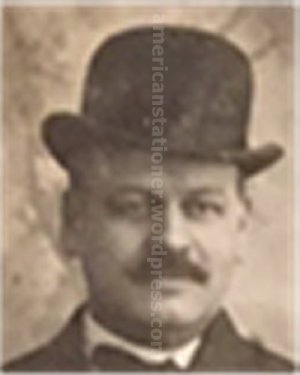 Perhaps surprisingly, this adder works rather well for its intended purpose.  It is accurate, takes up little desk real estate and is quite quiet in operation.  It was mainly designed to be used by people dealing with monetary figures.  Note that there is a white line to the right of the third dial where a decimal point would be.  Also, the “cents” wheels are brass color and the “dollars” wheels are copper.  And while the instruction booklet will tell you how you can do addition, subtraction, multiplication and division anything more than simple adding requires far more effort than you would ever consider using.

Its relatively cheap price and easy operation were its key selling points as other machines of that period were generally much more expensive and difficult to use.  That being said, the five disc model sold for $10.00 in 1904 which when converted for inflation comes to $271 in 2016 dollars!

While this is a very neat bit of engineering, the initial lack of a reset mechanism and competing technologies put this company out of business before too long.  That wasn’t the end of the line for dial adders though as they made a comeback in the 40’s and 50’s and you could buy plastic versions of this same type of adder up until the 70’s.

Special thanks to Lorey Johnson and that awesome 10 dial English money Calcumeter I received from her!